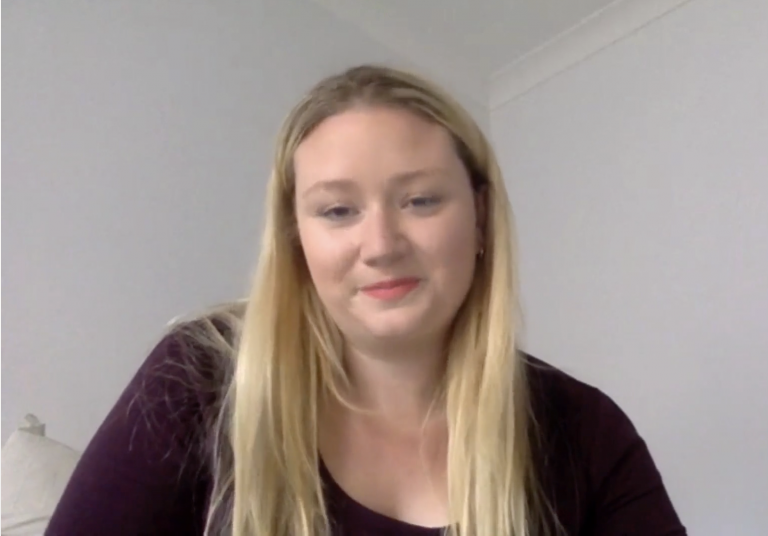 Hi, I’m Clare, and I support my partner in his business of Coy’s Constructions.

It’s a small residential construction company, specialising in renovations. We work in mainly the Maroondah area of Melbourne, which is East.

We have been in business for about seven years now, and Tom became a registered builder just shy of two years ago.

So we’ve just been building up the business and now obviously we can do contracts, expand the work and do more meaningful work that Tom’s been trying to do for years.

How I Found APB

After we joined APB, I was able to reduce my hours at work. I was working four days and reduced that down to two days.

I’ve got two littlies and kept them both in childcare the extra two days and I spent the two days that I had without them at home. They were my solid days of working, which helps a lot. The days that they’re home, I do it when I can.

I work a lot at night as well at the moment.

I found APB when I was receiving some adverts through Facebook; I’d been looking at them for quite a while and the taglines always resonated with me, but at the time I never clicked on a link.

I hadn’t looked any further into it but the timing worked out perfectly when I took my this little one to sleep school.

It was actually exactly 12 months ago, I think, to the day.

Suddenly I had four days of nothing to do and I had been receiving the emails for a while. And I just started looking through them and it really resonated with me.

It was just an answer to a problem that we were struggling with: we were up late every single night, and we weren’t getting anywhere.

We felt like the business was making no money, like we were just keeping our heads above water.

And I watched one of the videos. I don’t know if it was through Facebook or email. And I called Tom and said I’ve booked us in for a meeting, it sounds fantastic.
It was a small fee, I think maybe $100. And I thought, I’ve got nothing to lose but $100.

And that’s how we started.

Tom and I decided to become mentoring clients of APB because we needed accountability. And we like being able to ask questions.

So often Tom and I have got a million questions and it’s nice to be able to bounce ideas off someone and just sort of get reassurance that we’re doing the right thing and following the right procedures and implementing them the right way.

For us it was important to receive guidance and advice about when to implement procedures; obviously people come in to APB at different points in their business. We were pretty fresh with Tom only just being registered.

It felt like we were starting a business from scratch.

And for us, starting from the beginning, we’re going to have very different things to implement than someone who’s been in business for ten, twenty years.

It was quite overwhelming at the start.

I’d been seeing all the different courses that were available and just saying, “Oh my gosh, I want to do them all but I don’t have time.” And just having the coach there to take a step back and say, “No, you don’t need to do that part yet because we need to implement, say, the marketing first.”
It was just that there was so much there and I wanted to be able to do it all, but obviously you can’t do it all at the same time.

And I think that’s the benefit of the coach: you know that you don’t have to, you’ve got someone there that’ll say, “Okay, you’re ready to do these steps.”

And they can point you in the right direction of which ones you need to be doing.

We’re No Longer Afraid Of Being The Most Expensive Choice

The three biggest things for us that we’ve taken away from the last 12 months are, first and foremost, Tom’s confidence as a builder. Tom has always been a great builder.

He does very high-quality work but he hadn’t been able to give that message to clients.

Coy was always a little bit more expensive than the guy next door but when Tom handed over his quotes, they had nothing to go off.

So Tom’s more able to explain why his quotes can be more expensive, and often he’ll say, off the cuff, “I’m definitely not going to be your cheapest, but I will give you a quality job.” And that is a huge shift in Tom, just him having the confidence, and I guess the right terminology to use as well.

It has just been incredible for him and he’s so much prouder of his business and his work in the last 12 months than he ever has been before.

The second thing for us is actually making money.

We realised that before joining APB, we were barely even covering our expenses.

We were always chasing our tail with payments.

We would do materials and labour plus 20% and now we realise that 20% was just the business’s cost, so we actually weren’t making any money.

Now we’ve got a proper formula that APB has taught us, the Pricing For Profit, and we’re making money for the first time, which is just awesome.

So him being able to get up and go to work knowing that he’s going to be bringing home a profit has been incredibly valuable.

Third thing for us is just having goals to work towards and it’s nice to know that they’re achievable.

At the start, 12 months ago, I thought, “Oh wow.” I could never believe some of the things that people were saying.

I think our biggest contract that we’d signed was $40,000 before joining APB, and in the last six months we’ve signed $500,000 worth of contracts.
So it’s building the business and yeah, it’s very exciting.

I would definitely recommend APB to others.

I always laugh because when we joined, I remember hearing of other members who say they don’t recommend APB to other people because they don’t want other people to know.

And we don’t recommend it to our friends, but to anyone else that’s a little bit outside of that circle and not in the same area as us, we just rave and rave and rave about it.

The time and the money that we paid for APB doesn’t even come into it because there’s no way we could have ever achieved what we have without the help of someone like APB.

So when we get the bill each month it’s not even a question as to whether or not we’re going to continue, because, as I’ve said before, we’ve signed $500,000 worth of contracts in the last six months.

The small amount that we pay is well and truly included within those contracts.

And we couldn’t have done it without APB.

I know that it’ll pay off in the long run and that’s what we’re working for at the moment.

How To Get The Most Out Of APB

It’s very clear to follow all the guidelines that are set out in the online portal, but also you’ve got the Facebook group.

And if I don’t post, I’ll do a search beforehand in the group, and often that’s quite useful as well, because not everyone is available to answer your questions then and there. You then get the responses of people who are no longer with APB, or people who, for whatever reason, are busy that day. You get a very wide range of responses and you’re very supported.

You can always ask questions.

There’s been many times that I’ve emailed and said I’m not quite following this, and I’ve always had a very quick response.

I’m really enjoying the marketing side of things.

I can’t think of a specific one but I enjoyed doing the brochure and the website and having the experience of designing.

I’m not very creative but just looking at other builders’ websites and being able to pull it all together was very satisfying.

And particularly the brochure, just being able to hand that out, clients are always very impressed at the level of detail that goes into it.

And most of them have never seen a brochure like that before.

I like to do something and see the end result and be able to admire my work.

APB Have Been Invaluable

Like I said, we couldn’t have gotten where we are today without the help of APB and we’re just so grateful.

I don’t think a week goes by that we don’t say, “Oh thank goodness we found APB.” And it’s amazing how things fall into place.

If I hadn’t gone to sleep school that week, I probably wouldn’t have looked APB up for a while longer and I know that there are lots of statistics out there, and we know that most businesses fold within five years, and who knows, that could’ve been us if we kept going the way we were.

Before we joined and we had our initial consultation, we had been asked how much money we had in the bank; we had $700 in the bank and that was all.

So to now know that we’ve signed that value of contract and are getting a nice healthy profit out of it, it’s invaluable, so thank you.

I remember being told early on when joining APB, even if it’s two hours a week, if you can put aside two hours, you’ll go far.

And it’s been true. Some weeks we might do nothing and then the next week I might do a few hours’ worth.

And every hour that’s put in, it comes out.