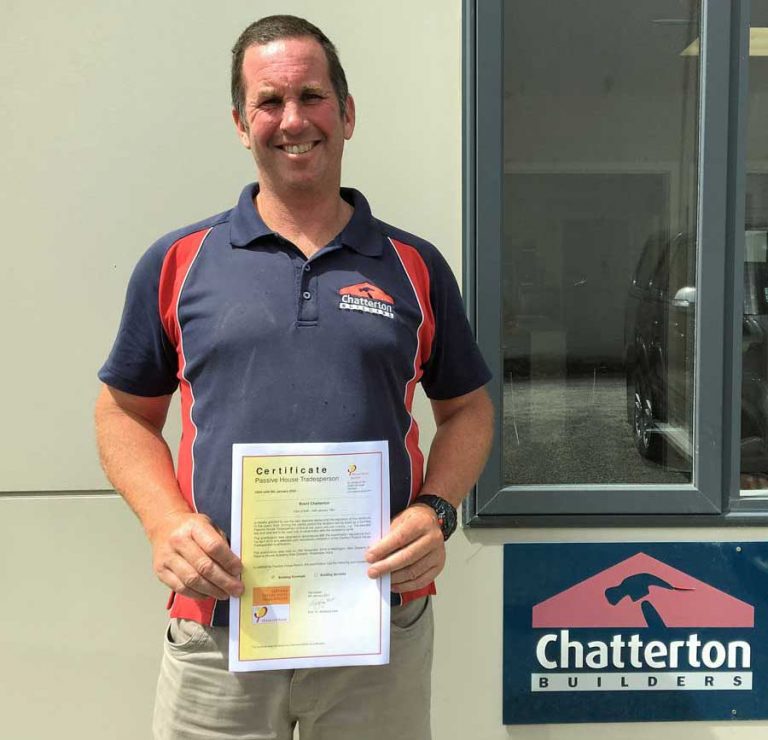 We’re Chatterton Builders; we’re based in Christchurch and we service most of the Canterbury region.

We specialise in mostly personal house construction and energy efficient builds. Our specialty is in using solar panels and other energy-efficient methods.

Before the earthquakes, our advertising was mostly by word of mouth. But, things have evolved quite a lot in five or six years and we felt that we really needed help to get back up with the state of play: to try to catch up again. That’s when we reached out to APB to help us with that journey.

We hadn’t really tried other coaches too much; just very briefly, had but nothing too major. And we had looked at the possibility of joining a franchise company.

I learned a lot about processes and what they did as far as systems go. But I came to the conclusion that with a bit of help from somebody else, we might as well be doing it ourselves rather than try and follow somebody else’s templates because I didn’t think that would work overly well for us.

I found APB through the same channels that we get a lot of our work from, and that was through Facebook. I discussed it with my wife and we decided that we needed to go down that track.

We had a one-on-one session with an APB coach for about an hour and we were pretty much sold after that session. Once we talked about what we needed and what APB could offer, it just seemed a natural fit for us.

It Really Paid Off To Show People The Value We Offer

We’ve been doing it for a while now, but it takes a long time for those gains to come through. But they haven’t been little gains that we’ve made; we’ve had very large gains. You get the wee gains in the short term, but the thing that blows me away is the big gains that you make in the long term.

Once we had our CRM setup, it blew us away that we got gains that came back to us, 12-18 months later. We had so many people who were all qualified and we just didn’t know where they’d come from. They know more about us than we know about them; it was really cool the way that’s happened.

One of the bigger gains that we got is that we were able to specialise in something. When you become an authority, and you become quite knowledgeable about stuff, you can really predict your margin. That’s been a really big thing for us. We weren’t just getting busier and busier, we were able to actually predict that margin and make sure that we’re profitable.?

We’ve had a couple of times where we just had to stick to our guns on our pricing and show people the value that we give them for that extra money. I think it really pays off; people know they’re going to get good service and that the jobs will be professional.

They said it was chalk and cheese, comparing us to the other two builders, so it was a no-brainer for them just to choose us to work with. They sat down with us after the tender process and tried to trim back the price a little bit. But we were still able to predict our margin from the tender and then we completed that job really, really well. There was a bad experience with the architect, but we finished the job on a really cool note. The guy’s a raving fan of ours now; he’s probably a real A-1 client of ours, so that was a good gain.

For a long time, we didn’t have good clients. Because of the earthquakes, there were always insurance people who would battle about the job. So, it’s been really cool the last couple of years to finish jobs on such a good note.

Before we joined APB our net profits were always quite low, even as low as six, seven or eight percent. Now we’ve managed to lift them up to the teens. We got them up to 12%, but more recently we’re starting to get even bigger. We’re reaching 18% now and it’s really quite exciting. It’s great that we can finally start believing in ourselves; believing that we can achieve that.

After the insurance work dried up, we went through a really bad patch. Even though we’d been with APB for two years or so and had learnt about everything that we needed to do, everything was in place, but we still hadn’t climbed out of the hole.

We realised that we had to go away and do the stuff that we had learned, instead of just keep learning it. We had to implement it, which we have done in the last two years. Now it’s obvious for us to jump on board again with APB and keep pressing home with all the systems, to get refreshed and reminded of what we should and shouldn’t be doing.

This has helped us make a difference in our building company. It blows me away that one or two percent, either way, can make such a huge difference. I guess I didn’t appreciate that much previously.

I Want To Focus More On Sales And Marketing Moving Forward

Because our business had gone backwards, the next step for us was to keep going forward.

I quite often talk about a glass ceiling situation. We had to scale back a wee bit in size to be able to implement all those systems and put those strategies into place.

But we’ve got to the point now, after jumping back on board with APB, where we’ve really tried to move forward a little bit further. We’re at the stage where it’s really critical for us to employ very good, top-end staff so that they could almost take over. They pretty much run the business so that I can just keep focusing on the sales stuff. So, at the moment, I’m still doing sales and project management and overseeing the business.

The next part, for me, is that I’ve really got to let the reins go of that project management. The guys on-site manage the jobs extremely well, but now I need someone to take care of overseeing the construction side of things so that I can focus more on the sales and marketing and closing off more of those deals with good margins.

I’m always recommending APB to other builders. Some other builders I’ve spoken to in the past, who have been part of APB, tell me that they don’t want to spread the word too much. But our coach has harped on me for years about it being a race to the top and not a race to the bottom. We can all reach the top; it’s not a competition.

It’s Critical More Builders Get On Board With APB

So, I think it’s really critical that more and more builders do get on board with APB. That would help us all to lift the bar on how we operate and make proper margins and stop these other building companies falling over.

So definitely, if anybody’s keen or willing to get on board with APB, I’m always happy to talk to them. I’m always encouraging other builders to join APB, that’s for sure.