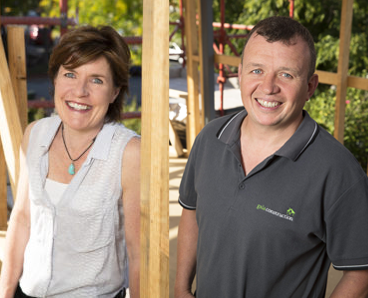 Our business is called Gaia Construction. I’m the registered builder and I deal with the client meetings, quoting and project management. Sue does all the admin and marketing. We’re based in Elwood and we work in the Bayside suburbs in southeast Melbourne. The niches we specialise in are renovations, extensions and passive houses. Our job size goes from approximately $350,000 up to $2 million. We renovate and extend tired Bayside homes for people who don’t have much time and are looking for an awesome job in restoral.

We used to just work on referrals from architects. We found this was stressful and we were always competing on price. We still have very happy clients, and we have always finished our jobs on time and on budget. In 2016, we had a reasonably successful year. We were doing plenty of odd jobs, but only 1.5 jobs at a time. In 2016 we were relying heavily on referrals and we knew that because people build so infrequently, it wasn’t a sustainable way to build a business. We were getting great referrals, but you just don’t get enough. And so we knew we had to do something.

We Were Relying Heavily On Referrals Before APB

I was at a Master Builders seminar at the end of 2016, and during a coffee break, I was chatting to another builder who said that he received some funding to join APB and he’d seen how fantastic it was. So, I tucked that away in the back of my mind and at the beginning of 2017, I had a look at APB and it looked great. I contacted APB, had a chat with the people and we decided to join. At the end of 2016, when we were looking around at all the different options to help us with the business, we came across some free mentoring that was available through the council and so we signed up with a mentor and he was really helpful. We were looking at APB about the same time and the reason we decided to join APB rather than continue with the one-on-one mentoring was because of all the resources available and the support. Getting the group of builders that you could bounce ideas off, the level of support and resources available really convinced us that that was what we needed.

We were really busy in 2016, so we didn’t recognise that it was going to be a problem in the future. If we had met up with APB at the start of 2016, the following year wouldn’t have happened. It would have been a much better year. But that’s just the way it goes. We didn’t have a huge network of architects or contacts and we weren’t getting enough leads. We were winning most of the jobs, but not all, and we could see it wasn’t sustainable and we knew we had to do something. We didn’t know what we wanted to do. The ideas that we spoke about to the original business coach and the ideas that APB spoke to us about were both pretty much the same thing. So we knew you’re either both wrong or you’re both right. We talked about it, we decided one hour a month wasn’t enough. We looked at our finances, we could afford it, so we said, “Okay” and our APB coach is a pretty convincing salesman at the end of the day, so we signed up and we haven’t looked back since.

The Key Change We Made To Our Business

The key change was that we were getting some great referrals, but we also needed to quote for architects and we ended up just being a price-check. We were competing at tenders and other builders were competing on price and we just weren’t prepared to drop standards. But we were relying on winning jobs through tenders and we were finding those difficult to win because we weren’t competing on price. And so the key change that we’ve made, after joining APB, is to try and take clients out of the market earlier, so start working with clients at the beginning of design, and that’s been working really well. It gives us a chance to build a really good relationship with the client and when it comes to building, they usually don’t even go out and get other quotes. So, that was a really key change to our business and I think that’s a reason that we’ve really been able to grow and be more successful.

We even had one client where we did stage one of their works and then they wanted to do stage two; we needed an architect so we approached an architect that was recommended to us. We gave the job to the architect, not taking the client out of the market. Then the architect ended up giving that job to a different builder, and the builder took twice as long. His quote was significantly lower than ours and it ended up costing the client more at the end of the day. We thought by giving the job to an architect, they would pass it back to us, but it doesn’t work like that with some people. So we decided we’re not doing that again; once we get a client, we’ve got to keep them. But we didn’t know how to keep them. The advantage of working with us over going straight to an architect is knowing that if you pay for something you get better advice. If you don’t pay for something, it’s not worth the piece of paper it’s written on. I would have had trouble asking somebody to pay me for a quote; nowadays, I wouldn’t even think twice. They’ve got half an hour, they get half an hour of my time for free. After that, if they’re not going to pay for my time, we don’t speak to them anymore, and I’m quite happy with that because it gets rid of all the tyre kickers.

We Have Leads On Demand And A Professional Network Now

I think in terms of the process, it’s evolving even though we’ve been with APB for a couple of years now. We are a lot more comfortable with the process now, and understanding exactly what we’re offering and the value, but it’s something that we continue to work on and refine and improve.

Though our leads now come from marketing, we’ve also got a network, which we never used to have. We actively went out and made one. Following advice from APB, we talked to local estate agents, buyer’s advocates and people like that and they actually refer people to us as well. This enables us to sign people up early. We might give them a small concept package, for $2,495, if they don’t know what to do with that house, and we give them some rough costings.

Most of these go through to projects, some of them don’t go through to contract or some of them don’t go through to a design. But the ones that do go through to design have all signed up to contract as well. If we can get people to put pen to paper with us, we’re pretty confident about getting a job with them 18 months later. Our goal for this year was to have three jobs running permanently by the end of the year. It’s now September, about two-thirds of the way into the year, and we’ve reached our goal for that. So, we’re quite happy with that and now it’s a lot of work just keeping it going.

We have two to three more jobs in the pipeline that are working their way through to the design, so we’re quite happy with how we’re sitting at the moment. Not resting on our laurels.

We weren’t even a specialist company before this, we were a building company, the same as everybody else. We do new builds, we do renovations, we do extensions, we do whatever you want. But now, we specialise in renovations and extensions or sustainable builds. And if somebody comes to us with plans for a new build, we generally don’t look at it, unless it’s a really, really nice job. I’m a carpenter by trade so I used to do the jobs and if we didn’t have a job, I could always go out and work for another builder as a carpenter for a while. Which wasn’t a particularly enjoyable experience, but we had to do that from time to time, just to keep it going. And it was kind of when we got a job that that was a bonus.

But now it’s completely different, I never pick up a tool anymore. I’ve got soft hands nowadays. We do a script for every phone call; before, every phone call used to be made up. Each time I didn’t know what was going on, now we’ve got a short, sharp script and they work really well.

I do like the Boardroom meetings because we speak to the other builders, whether online or in a boardroom, and just hear what their problems are, what their issues are, what their solutions are. We’re all going on the same path or similar path. It’s nice to hear how they overcome them, it can be that one builder is up at the moment or letting other builders down and then six months later it’s the other way. So it’s understood that it is a bit of a rollercoaster and you just go with the flow. If you stick to the process, it works.

We Learnt To Be Really Clear About Our Sales Process

We learnt how important the sales process is, being really clear about that and mapping it out so you can communicate that to clients, that whole idea of how you can’t sell to a confused client.

Just being really clear about our sales process when we didn’t really have one before was a huge step for us.

The other one was the importance of marketing, with social media, Facebook. We weren’t doing any of that before, I had no idea what to do. That’s been really key for bringing in leads so that is the second one.

And the third one would be the resources, the KPI spreadsheet. I just think that’s fantastic and it’s really an excellent way for us to track and set our targets and monitor and just have a snapshot of where we are at any point in time in terms of our financials. We had accounting software and things like that but we didn’t really know if we had made any money until the accountant told us at the end of the financial year. So having the KPI spreadsheet is brilliant and having worked with APB on the targets that we should be seeing and working towards those targets has been really fantastic.

Back in 2016, we were not really sure where the next job was coming from and we almost felt like we were begging for work a little bit. We didn’t have enough leads to be picky so the key change from that is, now we’ve got a lot of work and all really good projects too. We can be picky; sales revenue has doubled and the previous year, our leads have just gone through the roof. Things are looking really, really good for the future for us.

Let Somebody Teach You To Be A Great Businessman

I also absolutely recommend APB for builders who are just starting out, perhaps by setting up the investments and all the business skills; you know it’s not something you’re born with. You need to learn them, so anyone really wanting to build a sustainable business, have all the right foundations in place. To continue a successful business, absolutely I’d recommend APB.