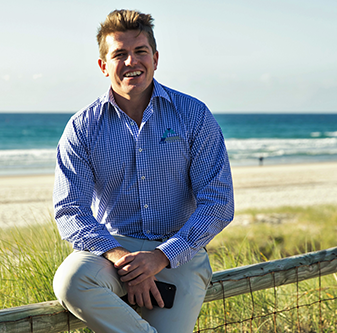 Our business is a residential custom home builder.

Before I started Alroe, I was a carpenter with my own business. I’m now 31 and I’ve been in business since I was 21; I brought on a business coach when I was 25 to learn mainly the basics of running a carpentry business.

The business coach helped me out a lot, but when I got to the end of the financial part of the course, I didn’t really think I was learning much more, so I stopped using him.

About a year ago, I saw APB advertised on Facebook, and the ads kept on coming up. After probably six months of seeing the ads come through Facebook, I clicked on it, purely just to have a look in, and see if it was just one of those other programs that you spend a lot of money on and not get much out of.

I was quite surprised at the service straight off the bat.

Once I clicked on that link, everyone I’ve spoken to so far at APB has been second to none in service. In my business, I’m all about the service and the customer, and I felt like the service from APB was amazing from the start, which made me really have a good think about jumping on their program.

So, I jumped on the program, just the basic, normal membership, and there was a lot of good stuff in there.
When I first started with APB I was lacking a few things in my business:

I Needed To Move From Referrals To Online Marketing

I’ve been referral-based for the last four years, and to be fair we’ve doubled our turnover each year, but I’ve got to the stage where we’re now up to that nine million turnover per year, and I can’t just keep relying on referrals. I have six or seven staff members in the office and on-site now as supervisors, so now I guess I’m becoming a medium-sized builder.

So, the marketing was a big thing for me. I needed to move from referrals to online marketing.

And then, probably three months after I first started with APB, I signed up to do the Mentoring Program and met my coach, who’s been really, really good, so far.

He’s been hard on me as well, which has been good because I feel like I knew a lot of stuff that I thought was right, but he’s put another angle on it, and it’s made me look at things differently. For example, we’ve already set up a KPI spreadsheet to track the progress of leads, enquiries and preliminary contracts.

I’ve started charging for quotes now, as well, which has been a great thing, to get rid of those time wasters. So yeah, so far, so good, and I’m looking forward to the future.

One of the biggest issues that my business has had for the last four years has been cash flow. Obviously, growing at such a dramatic rate has meant that my cash flow’s been tight, especially the last 18 months.

I’d jumped from four and a half million up to nine million, with really no backing behind me. I’m one of those people who doesn’t have any rich parents, or anything like that, so no support.

The biggest thing that’s opened my eyes with the Mentoring Program is actually the Pricing For Profit area of the program. We’ve been pricing jobs probably not as good as we should have, and really just putting a mark-up on our costs of sale.
That’s one of the biggest things, was the cash flow, and that is starting to turn around already, over the first three months.

Another part of keeping up good cash flow is getting the money in the door and not always being late. We’ve always had a big problem with people not paying us on time, so that’s another big thing, and my coach has been good at helping me with that.
We’ve set up strategies around that now to reconcile that into better payment terms, getting the money in, putting our contractors and suppliers on different terms.

I Wasn’t Tracking The Money Spent On Marketing

These are the main three things that I’ve picked up off the Mentoring Program so far: tracking, cash flow and marketing. I feel like they’re definitely getting close to being under control.

A lot of business coaches have a set strategy for business in general.

Building is completely different when it comes to actually knowing your business, so I think building’s one of the hardest businesses to have.

My coach just knows what he’s talking about; it’s awesome to be able to have him there and pick his brain.

The most valuable thing for me, to be honest, is the Work In Progress spreadsheet.

To be fair, I didn’t think it was right at the start, but when I got used to it, and actually used it, and then had that time with my coach, it’s definitely a great spreadsheet.

The KPI spreadsheet is amazing as well.

The most valuable thing for me is to be able to track how the business is going, and also track our business before it gets in the door, which is a massive thing.

I Can Focus Better With Real Information

You want to know what you’ve got coming in, so you’re measuring that, and then you know it’s going to be in the KPI spreadsheet when it’s actually current work in the next 12 months.

You can focus on more parts of your business when you can actually see the real information coming through it. Two years ago, I had nothing like that and although my overheads weren’t as large, I was able to get away with it and do a lot myself.

I didn’t have access to this information when I was trying to grow.

Looking back, I really made no money in the first two years. If I had met you guys in my earlier days, like when I was 27 or 28, then I reckon I’d be a lot further ahead than what I am now.

It cost me fifty grand to pay my first business coach over those two years before I came to APB. I did get a lot of good information, but you guys are builders, you’re dealing with building businesses, you’re not doing that with other businesses.

What I got from you guys at APB in the last six months is a lot more than I did with him for two years. I think you’ve just got a lot of good people in your business which makes that a good business if that makes sense.

Everyone’s on the same page.

Another thing my coach has taught me is how to mentor other people. If you want to grow your business, you’ve got to have everyone growing as well. That goes a long way to building a successful business.

I Now Have Quarterly And 12 Month Goals

Another good thing about being with APB is having goals. I’ve always had goals, but I’ve never had to follow goals, like quarterly goals and 12-month goals for the business.

Without a mentor, I wouldn’t have woken up to the way we’ve been quoting jobs and having that mindset where no one else puts on more than 20% mark-up, which only ends up being 5% net margin. I probably would have just kept going around in circles.

My overheads are 10% of our turnover, which is like $900,000, so I really need to be getting in $600,000 a month of work to even pay for the business. So, I think I found you guys just at the right time, not saying I would’ve gone under, but I would’ve kept on fighting my way through it.

It’s been a big relief to find APB.

Finding APB Was A Big Relief

Obviously, you guys have got a very good business here, and you’ve got good models inside the business, so giving those models to other builders would be affecting my competition, but I definitely would recommend you guys.

For the reasons why, Russ has been a builder with other companies, by the sounds of things, and everyone, in general, has their own thing to bring to the table.

And the vision of your company, you can see it as clear as day, you want to help other builders become successful. I’m a true believer in what you guys have, in the normal Membership, and in the Mentoring Program.

And the support you guys give to us is pretty second to none.

I’ve been really, really impressed with the service, to be honest, I even said to Sky the other day, if I do something online, she rings me in the next two minutes.

It’s just the processes and the procedures, and all the programs you guys use, are just second to none.

So, if someone can learn even just that from you guys, in your business, they’ll go a long way toward being successful.

I couldn’t be happier. I’d fully recommend APB, for sure.